The buccal mass and beak of Eledone cirrhosa

The buccal mass and beak of Eledone cirrhosa

Eledone cirrhosa is one of the most common cephalopods and regulary used for research. In this application the beak and musculature of this cephalopod is shown and explained. The beak is important because most of the time it is the only remains of any cephalopod, so researchers are eager to link the appearance of the beak to species, size, gender and age. The beak is controled by a complex musculature. The musculature shown here is interpolated from the study done by Uyeno and Kier in 2006 on Octopus bimaculoides, the beak is from an Eledone cirrhosa specimen I examined myself.

Five mandibular muscles connect the beaks to each other and to the buccal mass sheath, a connective tissue sheet that encapsulates the muscular part of the buccal mass 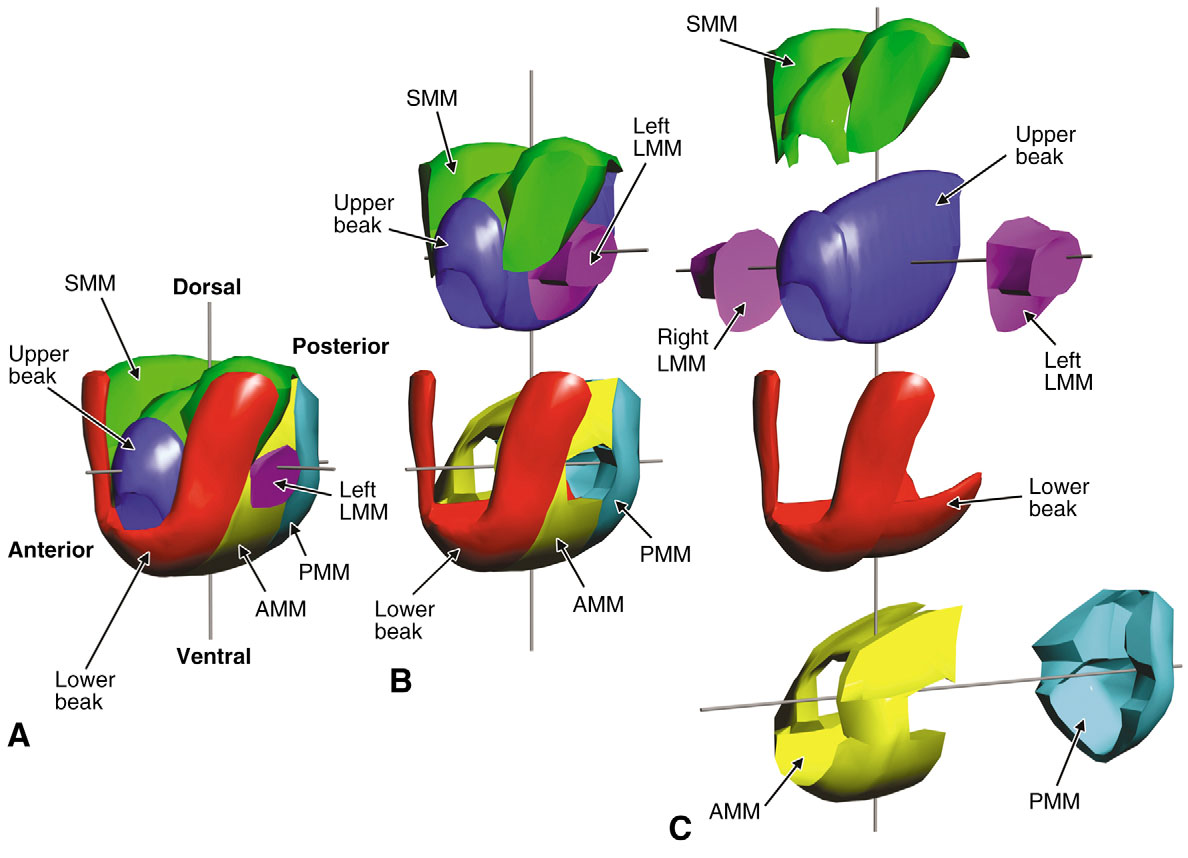 The fold that forms the rostrum and hood of the lower beak has enlarged dorsal extensions, termed the left and right wings.

The lateral mandibular muscles are robust, cylindrical, and symmetrically paired muscles originating on a large area of the left and right lateral walls of the upper beak. The muscle extends laterally and has a somewhat smaller insertion on the buccal mass sheath. Three different orientations of muscle fibers are observed. The first group of fibers originates on the lateral walls of the upper beak and extends parallel to the long axis of the muscle to insert on the buccal mass sheath. The other two groups of muscle fibers are perpendicular to the orientation of the first as well as to each other, one group oriented dorsoventrally and the other antero-posteriorly.

The superior mandibular muscle is a robust dorsal muscle with three divisions. This muscle originates along the crest of the upper beak and includes a central division and left and right divisions that extend anteroventrally to insert on the enlarged wings of the lower beak. These robust left and right divisions constitute the bulk of the superior muscle and include fibers oriented parallel to the line from origin to insertion.